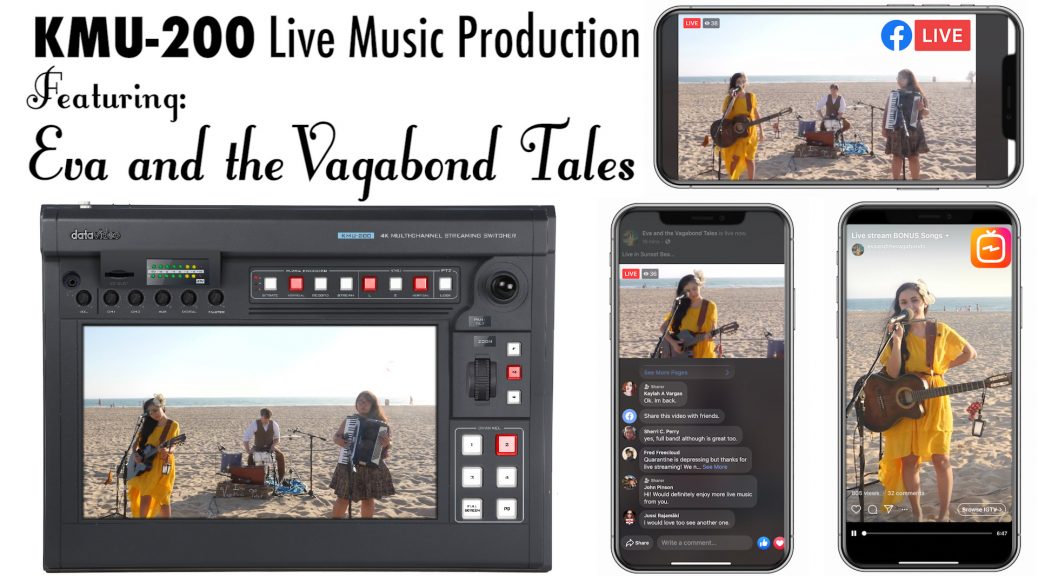 Eva and the Vagabond Tales is a folk band based in Los Angeles who have been playing together since the mid-2010’s. The Coronavirus pandemic has greatly affected social gatherings and has limited live musical performances all over the world. Before the pandemic, this thriving band practiced, wrote lovely, catchy songs, and they played to crowds of fans on a weekly basis. But now because gatherings became illegal, live performances had to stop. How would the Vagabonds reach their fans now?

They did what any young entertainers would do – they pulled their cell phones out of their guitar cases and started live-streaming and uploading videos to Facebook and Instagram. Technically it worked, but it was not without its glaring faults. Sound quality was poor, and video was limited to a single camera angle. As the camera operator would move around the room while filming different band members, their corresponding instruments or voices would become amplified and stand out rather than maintain a nice, balanced mix throughout the performance.

Luckily, with expert guidance from Datavideo, Eva and the Vagabonds did not have to live with this less-than-ideal setup for long. By adding the KMU-200 to their production workflow, the band was able to accomplish their goal of reaching their fans on Facebook and Instagram while upgrading the quality of their content by leaps and bounds.  Now, they could stream and record their performances in multiple angles using a single camera. Unique feature of the KMU-200 allowed them to select regions of interest shots within a single 4K camera shot to create a multi-camera production, where they can zoom in on individual band members to showcase their talent. Also, the sound was balanced, and it improved dramatically thanks to the KMU-200’s professional XLR inputs and built-in audio mixer.

“[The KMU-200] has left and right XLR in, and it’s really high quality. And there’s no latency.” – Jake from Eva and the Vagabond Tales

The  KMU-200 is revolutionizing  social media streaming because of its unique ability to record and stream in 9×16 portrait mode as well as traditional 16×9 horizontal mode. The band simply records footage that is instantly optimized for IGTV, Facebook, YouTube, or any other popular CDN or social networks.

Since meeting Datavideo, Eva and the Vagabond Tales continue to bring their music to viewers on the web, reaching their current followers and expanding their reach to a world of new fans.

“We had a chance to go live with the KMU-200, and it was a really great experience… I think it’s really important right now to keep in contact with my audience on all of my social media platforms.” – Eva from Eva and the Vagabond Tales