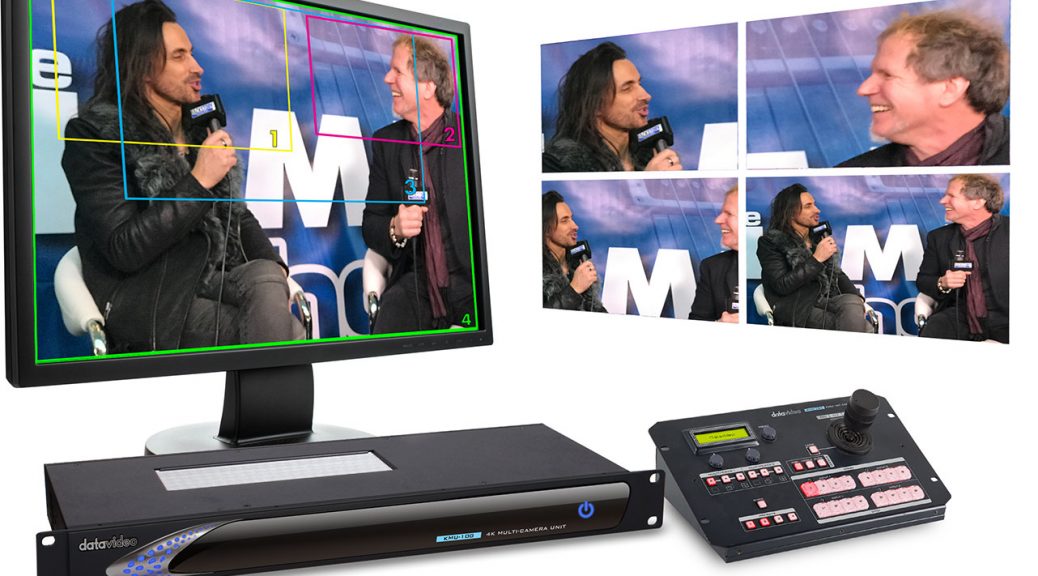 2017 saw another iteration of the ever-exciting NAMM Show. Luckily, I was able to attend once again, and this time I was given an invite from Datavideo,  a very special company with a very special product that they like to call “KMU-100.” It’s a gem from the video world that made its way into this sphere of audiophiles and musicians, giving them a way to easily simulate a multi-camera professional broadcast of themselves with all the close-ups and angles of a pro video team. But here’s the kicker, you only need ONE camera.

From what I understand, any professional live video shoot will typically involve a few common things: You’ve got your cameras for each camera angle, for the close-ups and wide shots. And then, you’ve got a video switcher that all the cameras plug into to switch the main program video that the viewers will see on TV, on a live big-screen monitor, or in this case, on a live stream to the internet.

BUT, with Datavideo’s new KMU-100, what you instead have is one or two 4K cameras set to wide shots. Then, using the KMU, you can pick up to 8 windows within those 2 wide shots for close-ups (or other wide shots). The KMU-100 then has 8 video outputs that can send HD versions of all those selected windows to the video switcher. Everything else from the switcher to the final output destination is the same. But the difference is that now instead of having 8 cameras, you only need 1 or 2. And instead of having possibly 8 camera-people, you’ve only got 1 person in front f the KMU-100 controlling the windows using the included laptop software.

At the 2017 NAMM Show, Datavideo used this exact same concept to broadcast live interviews of some great musicians and instrument makers live onto Twitch.tv. It was a full production with only 3 people — one person controlling the KMU-100, one person switching video, and a 3rd person tending to miscellaneous things, like tending to the interviewer or prepping interviewees.

We’re likely to hear a lot more buzz about the KMU-100 as word spreads. According to Datavideo, at the time of this article, the KMU-100 has not officially been released YET, but it should be available soon. Definitely be on the lookout for this product if you’re interested in putting together a full multi-angle video shoot with less people and less hardware.

For more information on the KMU-100, check out this page on Datavideo’s website.