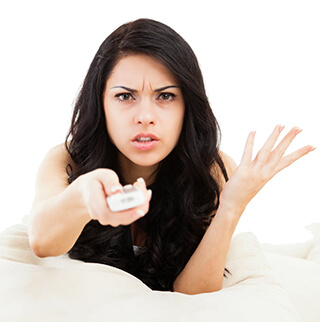 The difference between 720p, 1080i, and 1080p has been debated for years. 1080p is superior in quality, however whether or not that quality can be delivered is a whole other matter. In this world full of ads and sales for technology in 1080p HD, 2K, and 4K , the vast majority of content that you can actually watch is neither. As a video professional or consumer, you will want to read this article before investing in 4K.

HOW COULD THIS BE TRUE?

1080p is considered a recording and broadcast standard by many equipment manufacturers, and 4K live switching has started to come into the market. However, these two formats are in the video equipment manufacturers market, and not the consumer market.  The effect is similar to the hype for 3D – many cameras and systems came out to create 3D content before they could figure out how consumers could watch it.

1080p on Broadcast Television? Not yet.
Currently, less than 0.5% of Americans and Europeans have access to any TV channels broadcasting in 1080p. You can watch live broadcasts in 1080p in only select parts of the United States and Europe where local affiliates are experimenting such as NBC Affiliate, WRAL-TV, in North Carolina and Fox Affiliate WJW-TV in Cleveland. There are currently only a few more select stations in the US announcing that there will be new ATSC 3.0 technology that will be transmitted with 1080p Broadcast television. All other major broadcast networks use either 720p60 or 1080i60 encoded with MPEG-2. There is no official word about when any of the major networks will consider airing at 1080p in the near future. With no current announcements, that means you will be watching your TV on cable, satellite, and the air for at least 5 more years.

However, satellite services such as DirecTV and Dish Network utilize the 1080p/24-30 format with MPEG-4 AVC/H.264 encoding for their pay-per-view offerings that are downloaded in advance via satellite or on-demand via broadband. That is a great deal of trouble for your satellite company to do what Netflix makes so easy – deliver 1080p content. Today, no subscriber based cable channel or premium movie channel such as HBO or Showtime stream their services live to their distributors in this format because they do not have sufficient bandwidth to provide the format streaming live to their subscribers. If you think you are paying too much for satellite or cable right now, you will have to pay even more when they convert to 1080p or 4K.

Considering the above, if you were to buy a 720p LCD TV today, you may not even notice the difference between 720p and 1080p.

1080p Full HD displays have been available on smartphones since 2012.  It is now standard for mid to high end smartphones to have 1080p displays or higher. Whether or not it makes sense, 4K on smartphones is now a reality.

Although Netflix and YouTube both offer viewing options in 4K on some of their content, you are watching what is often a 15Mbps video stream, less than half of the bandwidth your 1080p Blu-Ray Player delivers. Your 4K viewing of a highly compressed video file may not be much better than 1080p.

You can also watch live streams in 1080p on YouTube and Twitch.TV, as well as many other providers and websites. Although 1080p is available, restrictions on bandwidth are the production capabilities of media producers means you are watching most of your live streams in 720p.

Is it worth it to buy anything in 4K?

Options to view content in 4K, which has 4 times the pixels as 1080p content, are limited. Currently no major broadcast network is presenting content with 4K or has any concrete plans to deliver content in 4K. For streaming, Netflix, Amazon, and Hollywood are offering streaming services for 4K video. You can can also buy 4K Blu-ray players and 4K titles. And that is it. The most expensive bill consumers pay for their home entertainment does not even deliver the best quality content, which may be why 25% of US households live without Cable or Satellite TV.

As a consumer, it may not be worth investing in 4K because you will be spending most of your money watching content that is just upscaling from  1080p.  This theme continues for video professionals in a reverse fashion, as their 4K production equipment creates content that is just downscaled to 1080p, than downscaled again to 720p or 1080i. It may be better to invest in equipment to convert 4K cameras into multiple HD cameras.

You may be wondering how to pick the best camera for your live studio or whether to invest in 4K. Just review the above information we have gathered on how consumers watch their content, and whether or not your audience and business model supports it. The major TV networks and conglomerates, with their billions of dollars, decided that quantity is better than quality, and with live TV, may even skip 1080p altogether.

Many TV networks long ago had to choose between 1080i and 720p, and many chose 1080i since it required less bandwidth and offered superior resolution. NBC and CBS chose 1080i, while ABC and FOX chose 720p.

When it comes to the choice of 720p and 1080i, it’s a matter of progressive vs interlaced. All HD broadcasts transmit 60Hz, and you get 30fps with 1080i, vs 60fps with 720p. 1080i can offer a sharper picture with its higher resolution in many cases, however being interlaced frames, viewers see motion artifacts and aliasing, which can often have a negative impact. You can see more information on how the two formats match up against each other here.

Shooting in 4K certainly has its advantages. Many filmmakers shoot in 4K to achieve better low light cinematographer than conventional film, in addition to the cost and distribution savings. Many cinemas are upgrading to 4K projectors. 4K also has benefits for HD distribution, giving content creators the ability to crop and color grade their footage. Live producers can even use 4K cameras to create multiple angles of HD cameras.

If you are shooting and producing content that is live, and you have equipment that records or streams in 720p or 1080i, you do not have to worry about making the big jump to 4K yet. You can even wait to upgrade to 1080p. If you are recording and uploading for on demand viewing, or your consumers are watching 1080p in some other way, 1080p is definitely worth the investment. But for live broadcast – the distribution networks and infrastructure are simply not ready yet.

You can check out more articles and production tips right here on the Live Production Blog.