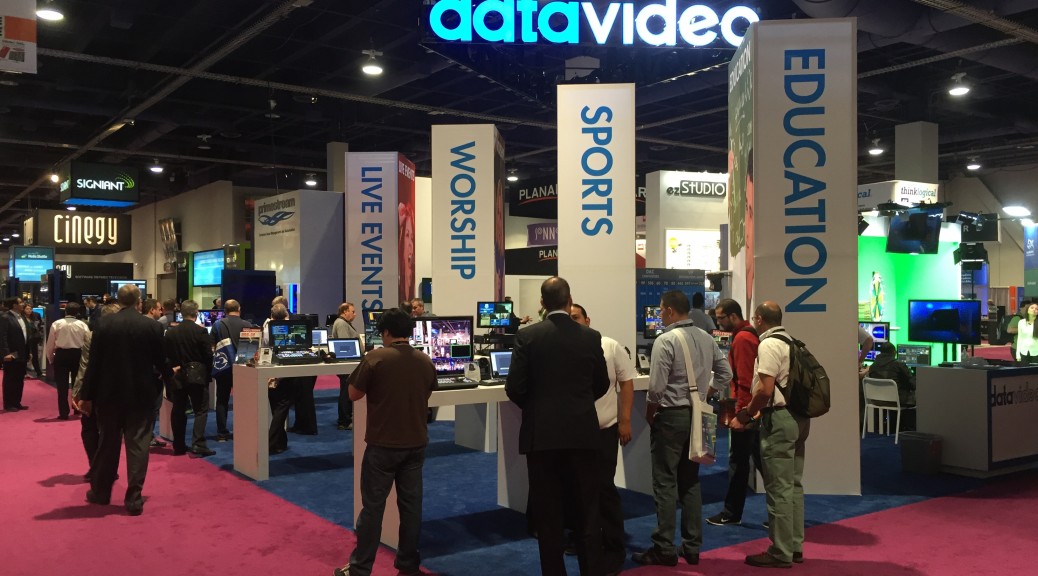 If you were looking to play in your very own live concert, be a contestant on a game show, or were looking for the best bang for your buck on some live video production gear, the Datavideo booth was the place to be this year at NAB 2015. This year Datavideo released 4 new products at the NAB Show and featured two live sets with complete Datavideo workflows that you could not only be a part of, but could also do a hands on demo and see up close in person.

The SE-700 Switcher was the star (until you hoped on screen, of course) of a live GoPro interactive area. The 4 input SE-700 HD Switcher, complete with a control panel for only $1799, was a major draw at the show, with a constant stream of visitors and professional cameraman capturing the unit in action. A GoPro camera was set up in a very simple green screen set with minimal lighting. You could then grab a bass guitar and stand on screen, keyed in front of a live rock band. Two other angles of the singer and drummer completed the set up. A Datavideo team member then recorded your ‘performance’ on a USB stick using the NVS-25 Streaming Server and H.264 recorder, and you could take it home to share.

The SE-700 switcher keying the GoPro camera on the small stage also had a second chroma keyer that was not in use. The SE-700 also features dual DSKs, dual multi-view, GPI triggers, and XLR audio inputs. It was arguably the most popular product at the Datavideo booth this year at NAB.

The Datavideo SE-1200 Switcher also made its debut at NAB. This 6 input switcher has all the features of the SE-700 and 6 inputs, 4 HD-SDI and 2 HDMI. The SE-1200 was being controlled with a touch screen tablet computer over WiFi and being used to produce the show at Datavideo’s main stage.

The wall to floor green screen stage was the set of various shows throughout the day being filmed with two Datavideo PTC-150 pan/tilt/zoom cameras. In addition to chroma keying these two cameras, the SE-1200 had two inputs with virtual set backgrounds, one wide and one close up. This created a look and feel to the shows that had a similar effect as much more expensive virtual studio based systems. Impressive for a switcher priced at $1,499.

Datavideo’s ‘Name That Price!’ was a game show where you could guess the price of Datavideo product bundles, and if you guessed correctly, you could spin their prize wheel for a chance to win some great prizes. Many contestants at NAB went home with Bluetooth speakers, portable USB chargers, and selfie sticks. A Datavideo NVS-25 Video Streaming Server did recording and live streaming for the productions.

In the afternoons, podcaster Don Baine, ‘The Gadget Professor’ interviewed various guests in the video production and technology industry debuting new products at NAB. Guests included the vice president of JVC promoting a new 4K camcorder with built in streaming and Tiffen showcasing a budget friendly steady cam rig for DSLR cameras. Don Baine and the Datavideo crew produced over 40 episodes of the Gadget Professor streaming live from the Datavideo booth at NAB this year, surely one for the record books! 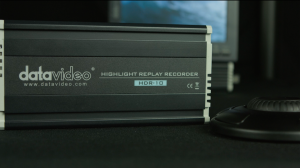 The Datavideo HDR-10 Instant Replay Recorder also made its debut at NAB. Featuring a jog shuttle control and various slow motion playback speeds, there is nothing like it in the market at its price point. The ease of use is also very attractive for video producers who are not professional broadcasters but want the same ability to do highlights and slow motion replays. The HDR-10 priced at $1,499 was also a popular stop at that show.

Continuing its reputation for building portable rugged video production products, Datavideo also released the HRS-30 recorder, an all in one recorder with a high quality 10 inch HD monitor that utilizes SSD drives and battery power to enhance its portability. The HRS-30 folds up into the size of a portable DVD player.

Just like every other year, NAB 2015 did not disappoint! We had four big product announcements, and each day we had great traffic flowing through our booth to check out new products. Everybody was very excited about Datavideo’s new switchers and recorders. Stay tuned for more updates from Datavideo!

We also had a lot of companies stop by for coverage of the new products which you can check out here: