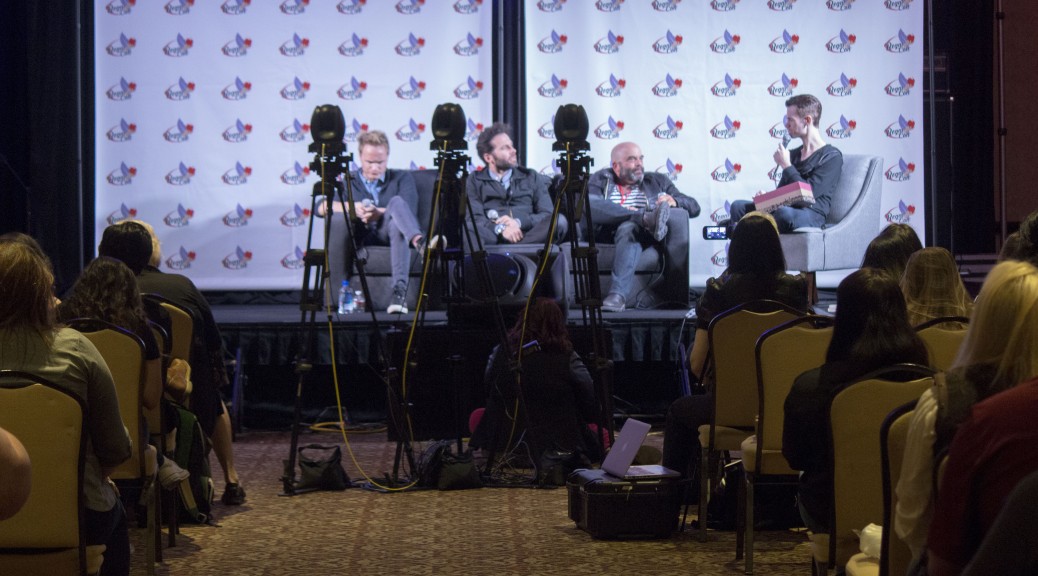 Regal Con 2015 was a convention geared towards ABC’s hit television series “Once Upon A Time.” This event, small compared to Comic Con and Wonder Con, presented a unique opportunity for die-hard fans to connect with actors on their favorite show in a more intimate setting. Fans across the world who could not attend were able to tune in to most of the content via a live stream on Youtube.

Several group panels were held with stars of the show, including Sean Maguire (Robin Hood), Emile de Raven (Belle), Rebecca Mader (Wicked Witch) and more. In addition to some panels hosted by the dedicated fan community, Lana Parrilla, who portrays the evil queen, hosted a much anticipated solo panel. Regal Con also hosted a special musical guest, 45 Spacer. Lana’s step-sons, Jack and Patrick Di Blasio, make up the alternative rock band. They’ve even written a song for “Once Upon A Time.”

Many volunteers helped make the event a reality. All of the above needed to be recorded and streamed live. Students from Golden West College in Orange County California, produced the video production for the 3 day event.

Instructors from Golden West College were interested in having a workflow for the event where the cameras, switcher, graphics, streaming, and recording were all under one manufacturer to have a smooth workflow and to avoid compatibility issues. Datavideo had exactly what they needed, and the students were able to rely on Datavideo for every piece of equipment in their live video workflow,  from cameras to recorders/streamers, and even the SDI cables.

“Datavideo provided us with everything we needed, from start to finish. They manufactured it all. They gave us the confidence to know that everything would work together, and when you are doing a live performance, you got to make everything work.”  -Sean Glumace, Digital Media Arts Instructor, GWC

The event required 4 cameras, but there were not enough students to operate them all, with the class members spread out over 3 days of production.

The new Datavideo PTC-150 Camera provided an automated solution that only required one operator at the control panel, the RMC-180. Three of these were placed in front of the stage to capture actors/band members, and one facing the audience.  They were connected to the RMC-180 control panel through ethernet cables.

Set up needed to be fast and easy, and the 4 input SE-700 HD switcher with integrated control panel was the perfect answer. This is a portable, easy to use switcher that only took a few minutes for the technical director to learn.  The production had to also provide a live video feed to the projector and the Regal Con staff was impressed that there was no noticeable latency between what was happening on stage and what you saw on the screen. At the most, the delay may have been 1/2 of a frame.

From the program out of the switcher, HD-SDI cable was run to the Datavideo TC-200, a little box that does key and fill for the graphics using a standard laptop.  This solution for titles and graphics allowed for all 4 inputs of the SE-700 switcher to be utilized for cameras, as the keying was was added down stream.  A laptop with an HDMI output or converter for its mini display port or DVI output, etc. is all you need. The system requirements of Datavideo CG software is not demanding, meaning many consumer laptops can become powerful character generators.

Next, Regal Con needed a Recorder, that once again needed to be portable. Carrying around an extra monitor is one more thing to pack, set up, and plug in, so the all in one HRS-30 Recorder was a good solution.

The program out from the TC-200, doing down stream keying from SE-700 Switcher, was connected  to the HRS-30. The recorder recorded high resolution .MOV files onto a removable SSD drive. The 10.7″ inch monitor was used by the audio mixer and Regal Con staff as a confidence monitor during the live broadcast.

Through the recorder, the SDI program out was looped  through and sent to the NVS-25 Streaming encoder box. It was configured to go directly to the Regal Con Youtube and live stream through YouTube’s ‘Live Events’ feature, which allow users, for free, to stream broadcast quality events in 720p. The stream brought the event live to fans that couldn’t make it to the convention.

There are future Regal Con events all over the world, and attendees for upcoming events were able to tune in as well.  This encoder also allowed a back-up recording to a USB stick while the streaming took place. This  not only was useful as a backup recording of the event, but was in an H.264 compressed codec, perfect for uploading clips to YouTube and sharing with media outlets.

A Datavideo DAC-70 was used to convert the video signal for an 8K Projector that did the in house video projection. The projector needed 1920×1080 interlaced video, but the workflow was built around 720p, the optimal resolution for the live streaming. The Datavideo DAC-70 easily converted the HD-SDI program out from the Datavideo workflow to HDMI for the projector.

Four 150ft SDI cable runs were laid down for the camera and a 100ft SDI cable run for the projector. All these cables were sold by and tested by Datavideo, eliminating one more headache from the production workflow.

One major challenge was that class members were rotated in 5-6 hours shifts during the 3-day convention, meaning the students didn’t have a great deal of time to rehearse or learn how to use the gear. However, everyone learned the gear quickly and the show looked professional throughout the event.

Datavideo manufactured all the equipment used for the production. Cameras, the switcher, character generator hardware and software (with the exception of the laptop) Recorder, Streaming Encoder, SDI cabling, Camera Controller, and converters, all under one support umbrella. The instructors at Golden West College said Datavideo made them feel confident that everything would be compatible and professional.