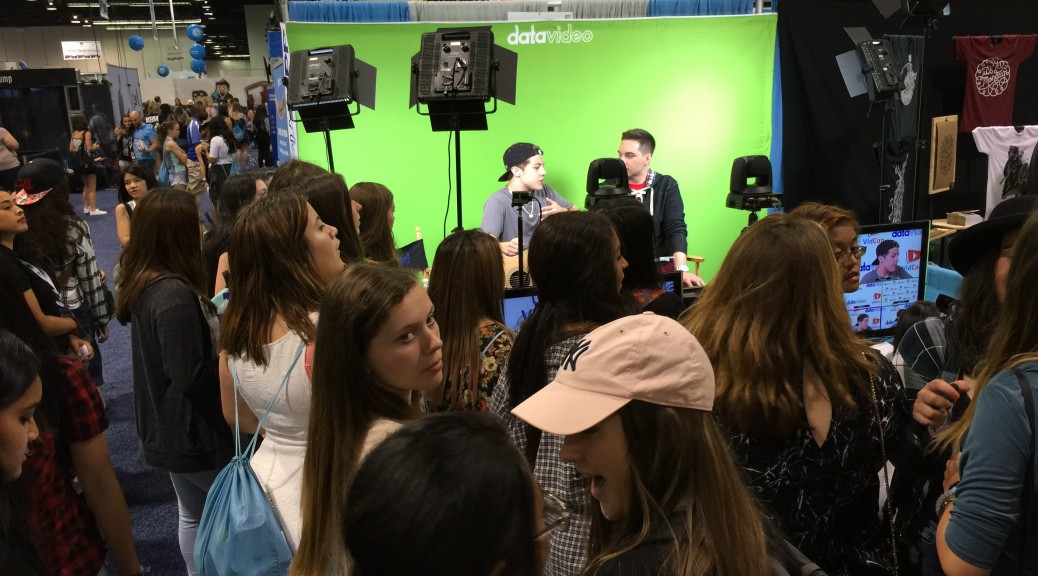 VidCon is an annual gathering of online video creators, fans, and members of the industry who share in the billions of dollars the content generates. Digital video generated on YouTube and other platforms is a revolution in online media.

The convention, which was started in 2010 by John and Hank Green of the Vlog Brothers YouTube Channel, has grown from 1,900 attendees in its first year to over 20,000 in 2015. Many of these video producers are looking to create quality content faster, and are looking to get ahead at creating content for the growing trend of live streaming, all on a limited budget. Datavideo products have already been used for some popular YouTube shows, and this year we set up a booth for live production at VidCon for the first time. Datavideo invited many talented YouTube Creators to shoot live shows with Datavideo cameras, lights, switchers, CG software and recorders.

You can see some of the content YouTubers produced and a look behind the scenes at VidCon in this video:

“For many of these video producers, they were able to experience for the first time having a finished show at the end of their shoot to post, rather then spending days editing their footage.”

A very eclectic and diverse mix of YouTube Channels shot with us, including singers, actresses, video bloggers, and artists. They were both well established and small. Singer/songwriter Reed Deming did an interview based show for his 71,000 subscribers, while the new channel ‘Blonde Slumber Party‘ recorded a mock late night variety show for just over 70 subscribers. In the end – traditionally post production heavy shows were able to shoot, edit, stream and record – live.

The booth was a 10×10 space, but that did not limit the ambition of the YouTube Creators, or the Datavideo equipment used to film them. The shows were shot with two remote controlled robotic cameras, the Datavideo PTC-120. These were mounted on the same table as the monitors and the SE-1200 switcher, which mixed the PTC-120s with a GoPro Hero 4, which also easily connects to a Datavideo switcher,  for shots of the audience. The tripods were delicately balanced on the table, but there was no need to adjust between shows, because the PTC-120’s were adjusted by a camera controller, the Datavideo RMC-190. The cameras could be set to zoom, pan, and tilt for new shots, depending on the show.

During many shows, the cameras were programmed with multiple presets, to quickly rotate between wide shots, two shots, and close ups. The end result was a production that looked like it was shot using 4 cameras or more, instead of two. This additional production value made the shows feel like something you would see on TV, rather than YouTube.

The Datavideo SE-1200 switcher can be operated using a touch tablet or PC, instead of the conventional, large professional control panel you might see at a TV station or stadium. This makes it easier to use for YouTubers or for the plethora of small and large production companies who create online videos. It has 6 total inputs, 4 SDI and 2 HDMI, as well as abilities to store images, chroma key two camera sources, key in live backgrounds, picture in picture, and a variety of transitions, which should fit the needs of even some of the more ambitious YouTube video producers out there.

For streaming and recording, the Datavideo NVS-25 was on hand to do both. The final video feed can output from the switcher and connect to the NVS-25 via a HDMI or SDI cable, and then immediately stream to a YouTube Live Event, which plays the same way a YouTube video plays on your computer or smartphone.

This feed can also be connected to UStream, Twitch.TV and many other popular streaming video services. While the NVS-25 is recording, it makes a H.264 video file which you can post on YouTube, Vimeo, and any other video sharing website.

For the live stream market, which is still growing and potentially just as unpredictable as YouTube in its ability to quickly explode in popularity, currently has low expectations for content. Many video producers and creators are investing more and more to raise production values to steer conventional YouTube viewers to anticipate the airing of live videos, like you would your favorite TV show. The myth of most YouTubers making shows in their bedrooms may hold some truth, but for many of the bigger channels, higher end multi-camera productions are very common.

“It was estimated that there are now over 200 YouTubers who are now millionaire’s from the revenue they generated on their YouTube channel – just in the last year.”

Many big businesses are fueling this industry by trying to advertise to younger audiences, who rarely view traditional television and consume most of their media online. This includes most teenagers and adults in their early twenties. The brands must go where their customers go – and if they can’t reach them on the TV in their living room, they will have to follow them to the laptops in their bedrooms, and the smartphones they have with them at all times. Datavideo is excited to return to VidCon next year, and do everything bigger and better.

For more information on the production equipment Datavideo used at VidCon, visit the Datavideo Website, or look at this VidCon Bundle.

Datavideo plans to support some of these rising YouTube stars in the future, including YouTuber Madi2TheMax, who made the hilarious Frozen Parody, “Do You Want to Be My Fan Base?” chronicling what was perhaps, secretly, every YouTuber’s experience at VidCon.