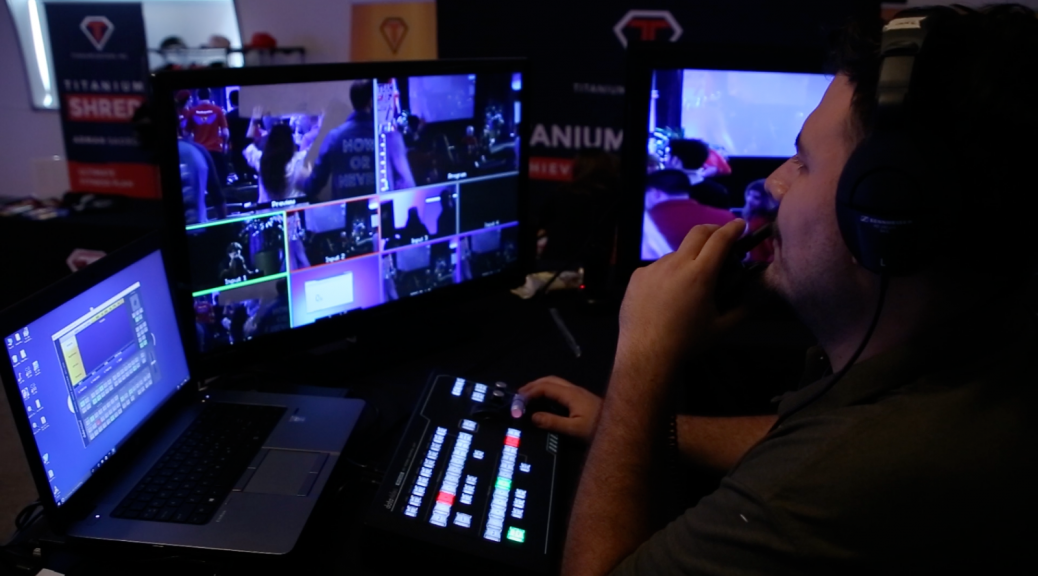 Recently, yet another client on a live video shoot wanted a lot of things, at the last minute, for the same budget. This was a shoot for a seminar by a life coach with a motivational speech and power point presentation in front of a live audience, all of which needed to be captured for an emotional pay off.

There was considerable investment into the 3 day, live event, so it was important to put on a good show for both the audience and the recorded content. The recording was going to be re-packaged and distributed for home video, as well as short clips for YouTube. However, what the client wanted the live audience to see was different than the recorded content.

The live audience needed the power point presentation (not as important for the viewers of a recording) and also, see one another through audience shots, to better get to know one another at the event. Both live feeds could have different sources at the same time, and would also need to be able to change sources, independent from each other.

Thus, the client needed two very similar but still different live feeds, one being recorded and one being watched by the live audience. Typically, this is a demand of clients at sporting events for large venues, and in the past, for the budget we had, the client’s request would have been respectfully declined, unless of course, there was more budget for another video mixer or console. However, I knew exactly how to accomplish what he had, not due to my technical expertise, but with a new switcher and control surface combination from Datavideo that is less than $2,000 – the Datavideo SE-1200MU 6 input switcher and the RMC-260 Professional Control Surface.

Believe it or not, figuring out this was the easy part. The SE-1200MU has two configurable output feeds: We used one as the ‘Main Program Out’ and the other was an Auxiliary output. Now, many of you may be saying the obvious solution is to use the AUX output as the preview, and I could have done two switches that way, but that was not possible as the client specifically asked for dissolves, which would take both the preview and program buses working together to achieve. The main program out would be of mostly the speaker and audience members, with a few references to the power point when a new slide was available. Next we had the dilemma of switching sources for the AUX output.

The key to making it all work was the SE-1200MU switcher, which could be controlled by both a PC and by the Datavideo RMC-260 Professional Control Surface.

This allowed myself and the technical director (who was also monitoring recording and audio) to use the PC control to switch between inputs for the auxiliary output, which would go to the stage.

The signal flow – aka, the hard part.

Inputs: Four Sony EX3 cameras were used to shoot the event, and their feed went into the SE-1200MU’s 4 HD-SDI inputs. One HDMI input was used for the PC running the power point presentation.

Power point was provided by a PC, operated by the speaker’s assistant. The PC’s HDMI output went straight into the SE-1200 switcher and worked without the need for a converter.

The 6th input remained open, we were planning on using a GoPro for a rear angle but the Sony EX3 Cameras were providing a sharper image. Instead, we kept it open in case another surprise was waiting for us once the show started.

Outputs: This is where it gets tricky. Both SDI outputs were utilized, one for main program out, and one for the AUX out. The stage would have a large, 12 foot tall center screen and a TV size reference monitor in front of the stage in the lower right.

This would let the audience watch the big screen behind the speaker, and the speaker would be able to see in the reference monitor what the audience was seeing behind him, without having to constantly look over his shoulder. Both of these needed the AUX feed, which would alternate between main program and the power point presentation from the speaker assistant’s laptop as well as audience shots… you would have had to be there at the time to understand that need. The presentation had a lot of emotion involved, a real energy in the room that was different than say, a viewer watching alone at home.

All the cameras were already at 1080, and resetting everything would be a time consuming task. We set the DAC-70 to downscale to 720p, which allowed us to provide the AUX out for the projector and reference monitor at 720 while maintaining our higher quality 1080 recording. After all that, it still had an open HD-SDI output if we needed it.

The SE-1200’s two HDMI outputs were used to provide a Multi-view for the technical director and also a program out. The HDMI program out feed was sent to a splitter, and that was displayed on monitors for the last 6 rows of the audience.

SWITCHING TWO SHOWS – The RMC-260 and PC App working together

The Datavideo SE-1200MU Switcher proved to be very versatile in this setting, much different than the last time I used it at the 2016 NAMM Show. The main success of the SE-1200 was its ability to ingest all the different sources and while providing all the outputs we needed. The DAC-70 we always have on hand, our ‘swiss army knife’ saved the day with the stage projector and monitor.

In a live production environment, especially on location, you have to be ready for anything and everything. That will never change, and with Datavideo equipment in your set up, you will sleep better the day before your big shoot.

Producer Isaul Trinidad and myself were lucky to be able to demo and test the Datavideo RMC-260 on location. For more information about it, click here. It will be available this NAB 2016.

(LuckyMig is the production company of Miguel Galindo, an independent director and producer.)