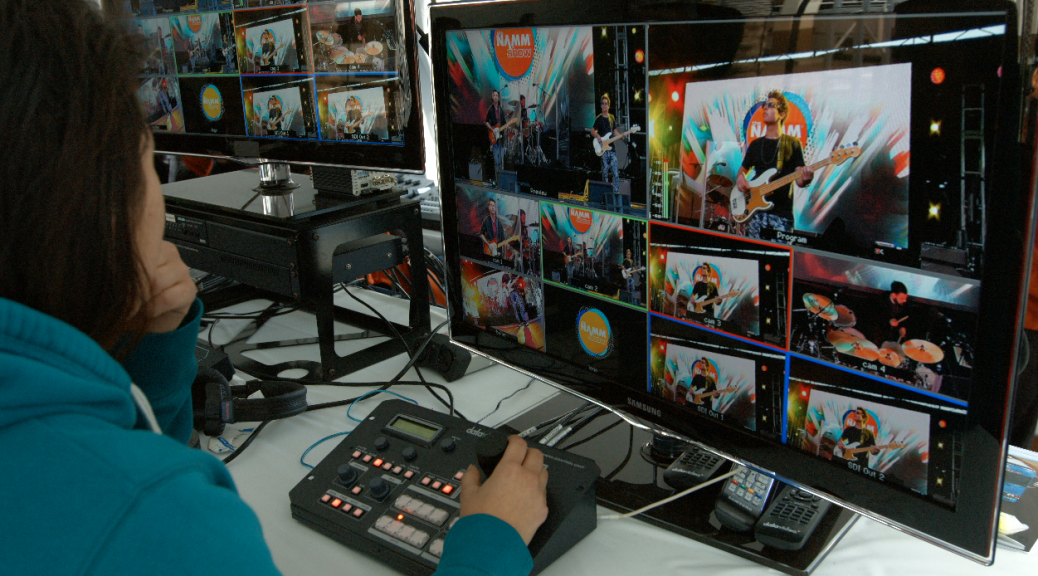 Are PTZ cameras difficult to use compared to traditional cameras?

What was some of your prior experience before this shoot?

I got the amazing opportunity to volunteer for the NAMM show with the crew from Datavideo to help out behind the scenes with the help of some of their equipment.I had worked on live events in the past as a camera operator, one being for the world cup of softball in Irvine this past summer.

How was your experience operating a camera controller different from operating a traditional camera at for a live show?

At the NAMM show, I had an entirely different experience. Rather than controlling one camera and using a headset to communicate with the director, I was able to have full access to control four different cameras. Each were placed in various locations to get the best shots of the bands that were performing.

Are remote camera controllers difficult to learn how to use?

After watching some of the crew for awhile, I was able to get a jist of how the controls worked on the RMC – 180 camera controller. It took some getting used to, but after a few tries I was getting more comfortable with all the buttons and features it offered.

What are the benefits of controlling multiple cameras from one place?

While working along side the director, it was easy to get instant feedback without the interruption of loud noises from the concert. The controller had all kinds of features, one of my favorites were the presets. Prior to each set I would have the cameras set at a specific angle and save them as presets so when as the action was going on I was able to quickly reference to the preset shots I made in the beginning that allowed the camera reset to it’s set position. This helped especially when there were bigger bands and some of the performers had a solo and we would alternate back and forth with individual shots to a wider angle.

Was operating four cameras at once for a live event stressful, and would you do it again?

It wasn’t stressful at all. In between sets, sometimes I helped the crew with adjusting camera angles and getting to hop on backstage where all the magic happens! Overall, I’m excited to have been able to help out and gain more insight with these kind of events. It was a memorable experience to learn the variety of positions and other roles that take part in broadcasting live events. It was a blast to be a part of this show and I had a lot of fun doing it.

To learn more about Datavideo Robotic Camera systems like the Datavideo PTC-150 and RMC-180 Camera Controller combo, you can click here or visit: www.datavideo.com.

You can see the Datavideo PTC-150 and  RMC-180 in action in the video below with a live streaming complete workflow.

One thought on “Operating Robotic Cameras VS Traditional Cameras”