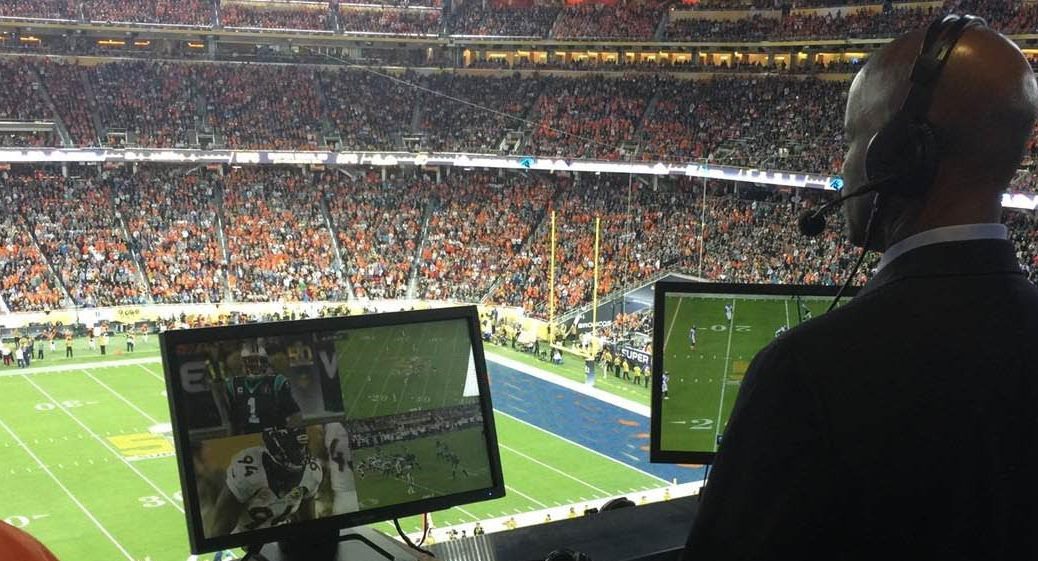 Cameras, lenses, and video mixers have all come down in price far faster than instant replay systems in recent years. One of my early gigs in sports was shooting  professional hockey over 10 years ago. The new $10,000 video camera I was assigned at the start of the new season replaced an aging $30,000 camera, while the new VDR instant replay system in the live video booth cost the arena over $50,000, replacing an aging system that was also over $50,000.

The price required to set up an instant replay system is less than ever before. The exact cost depends on the demands of your video production and how many angles need to be captured. So which type of system is the best for you and your budget?

Independent Producers and Schools – less than $10K
To start, Instant replay systems are made up of two primary components. One is the device, which today is exclusively hard drive based, that records and plays back instant replay clips. The other component is a device that controls the instant replay devices. This controller can be a computer with a keyboard, but ideally it is a separate professional control surface with customized buttons and a T-Bar for quick and efficient operation.

The most budget friendly starting price point to add instant replay to you production is available with vMix Replay, a software based instant replay solution for $1200. At first glance it is a great price, but the software is an add on to a VMIX live production software and hardware set up, which depending on the number and type of inputs you need, can cost anywhere from $4,000 for a customized PC configuration to the turn key solution vMix Go starting at $9,000.

The vMix hardware and software component would be the means of recording and playing back instant replays, which could be up to 4 channels.

The controller component of a vMix system is limited to a Contour ShuttlePro V2 controller. It may look new, but this is a 5 year old product designed for post production and other applications, for which it has positive reviews.

For a live application though, with the buttons so close together, mistakes and ease of use are going to be a concern for any user. The ShuttlePro V2 however can be purchased for an MSRP of $110. While not the most ideal professional solution, if you already are using vMix for live production, vMix Replay is the most cost effective solution.

All Datavideo instant replay systems come with the Datavideo RMC-400 Instant Replay Controller, a professional control surface. It controls up to 4 Datavideo HDR-10 Instant Replay units, which each do 1 channel of recording and playback.

The RMC-400 offers many functions such as slow motion, fast motion, reverse playback, and frame by frame review. Operators control the speed of instant replays with either the T-bar, slider or the tactile wheel. Some operators feel that the T-bar provides more accurate slow motion speed control versus a wheel, but Datavideo provided both.  The wheel wheel on the RMC-400 can be used for frame by frame as well as forward or reverse playback.

The Datavideo HDR-10 Instant Replay Unit is the work horse of the Datavideo Instant Replay systems, capturing and playing back uncompressed video with a 30 seconds buffer system. It can save instant replay clips that you create as high quality .MOV files inside its internal SSD drive which you could play back later.

All other instant replay systems in this price range capture and playback compressed, MPEG 2 or H.264 video, which may not match up with the original footage captured. On a frame by frame review of a play, live viewers may see increased pixelation. Datavideo solves this problem with uncompressed video capture, but there is no way to record a dedicated ISO for an entire game as the buffer for replays is limited to doing capture and playback for one play at a time on each HDR-10.

The Datavideo modular approach is unique. You could purchase a single Datavideo HDR-10 Instant Replay Unit and a RMC-400 Replay Controller to do instant replay for once channel for under $2,000 on any existing video mixer workflow. You can then add a Datavideo HDR-10 for each additional camera you would like to record and playback during the game.

The original low budget solution to instant replay was offered A few years ago by Newtek in the form of their 3Play Instant Replay series. They originally offered low cost instant replay at about $20,000. Now their newest 3Play 425 and 3Play mini instant replay systems have an MSRP of just under $10,000. Both of these options from Newtek offer 4-camera capture, 2-channel delivery to feed video boards or broadcast.

Like TriCaster, 3Play is built on a Windows platform. Although windows based systems can be unreliable, which is a real concern for live event producers, it is rare for systems to have complete failures on the job.

The Newtek 3play 425 takes HD-SDI inputs and is bulkier than the 3play mini, which takes only HDMI. Both systems offer recording for 30-40 hours of video, meaning you can have ISOs of up to four cameras. The Newtek 3play mini can do graphics and animations for replay transitions.

Tricaster offers an instant replay controller for their lower end 3play systems, starting at $2,300. It offers many of the same features as control surfaces that cost more. There are many dedidicated buttons that are in places very crowded.

The 3plays offer abundant hard drive storage and asset management with a catch – it captures MPEG-2 compressed video in the 3play 425 model, and the 3play mini captures compressed quicktime files. The quality is less than that of uncompressed video and can be noticeable in instant replay slow motion playback, but the end result is less noticeable if the broadcast is on the web in the form of a live stream or YouTube video.

The complete systems for up to four channels offered by Newtek for the 3play systems is a great deal as they come with the ability to also overlay graphics and do highlight clip editing. The addition of a professional control surface for enhanced control of live instant replays brings the total cost up to over $12,000, but if that is in your budget, Newtek has two great options for you.

Instant Replay does not need to be expensive. Recording and storing every angle of every game is expensive and may never be watched again. Even recording in 1080p may be a waste of time as most TV channels broadcast in 720p or 1080i. However in the next category, highly demanding TV broadcasts are getting some of incredible value for their money.

Newtek also offers the 3Play 4800 as a multi-camera live sports replay system with up to 8 channels for recording and capture. It offers slow motion, instant replay, in-game highlights and social media publishing in every game.

The Newtek 3Play has  up to 8 simultaneous live video sources, or up to 4 with fully redundant capture. The included software provides excellent asset management for its multiple hard drives. All of this is compressed HQ Quicktime video in up to 1080p resolution. It also has up to 4 tray-less SATA III removable drive bays with hot-swap support for unlimited storage and backup.

The 3Play4800 Controller can give a wide array of playback options for operators, from simple slow motion playback to the ability to go full throttle, with T-Bar-controlled playback and rates from -200% to 200% for highly demanding fans and officials.

With the 3Play 4800, Newtek is definitely setting its eyes on Broadcast TV and other higher end productions that can afford the $40K pricetag for the 3Play 4800 and 4800 controller.

Starting at $45K, the new ZEPLAY list price eliminates the burden for budget-conscious customers, yet assures a professional, reliable and feature-rich slo-mo instant replay server that is easy to use, with a quick learning curve.

Compared to other control panels we have reviewed so far, the ZEPLAY control surface looks outdated and may have more of a learning curve. ZEPLAY is aiming its products at seasoned professionals and they might not mind as much. However for a $50K plus system with the servers and control panel included, one could expect more.

ZEPLAY records and plays compressed video as well, just like the Newtek and vMix systems. ZEPLAY records and playsback I-Frame only MPEG-2 video at 100mbps (HD) and 4:2:2 color space. Slow motion at this compression is OK, but MPEG 2 is not the best format. However, the system does have a highlights editor which allows you to trim your plays, arrange them in a timeline, toggle between angles, change speeds, perform split edits and dissolve between plays. In this process you can export clips and sequences during the game while ZEPLAY is still running replays in either ZEPLAY’s native MPEG-2 I-Frame format or in DVCPROHD or ProRes(LT) formats. If ProRes LT or Proxy was the native recording, ZEPLAY would enjoy a huge advantage over the competition, but this is not the case.

All things considered, ZEPLAY offers a solution which brings the capabilities of much more expensive systems to college and professional sports at a fraction of the price. If you have $50,000 to spend on an instant replay system and need advanced capture features, replay functions, and servers, ZEPLAY is offering one of the better systems.

Recently, instant replay has been thrust into the realm of 360 with technology from Intel and its recent purchase of Replay Technologies. The applications for this new technology extends to live events and entertainment, but for sports, some analysts see it as little more than a high tech distraction that is a gimmick reminiscent of the failed ‘FoxTrax’ pucks used in the NHL 20 years ago. Often with technology and entertainment, producers will embrace new technology more because they could without wondering if they should.

All the hype in 360 and 3D, is creating a drop in price for normal 2D instant relay systems, to which viewers have been experiencing their sports for decades.

Broadcasters now have many quality options to get the job done. Anyone looking to implement instant replay systems into their productions must first identify their overall expectations, their system requirements and of course, their budget before investing in a new system.

WHY do productions need instant replay?

Even with the complete professional solution from Datavideo for 1 channel instant replay costing only $1,799, instant replay may seem like a big expensive investment to some producers. But that is a great investment. Instant Replay is a permanent part of sports for audience members, officials, players and coaches. When I was a teenager I remember volunteering to shoot high school football, and then later shot at a minor league hockey arena. The cameras were about the same quality, and I was about the same skill level as a cameraman, but the instant replay at the minor league hockey arena gave it more of a broadcast, professional feel. The high school football games were just as entertaining and competitive as the minor league hockey games, but the instant replay made a big difference. It could be a game changer to get a larger audience or have the game featured on an internet or local cable broadcast.

When you turn on your TV and watch a live sports broadcast it will not be long before you see an instant replay. It is one of the most highly demanded features in video production for professional and collegiate sports. You often know you are not watching a major league game just by the lack of instant replay. And now, with the options above, almost any production can have instant replay.